(Phoenix, Ariz.) The living legends of jazz, veteran musicians who have achieved greatness in performing jazz are now being honored at The Nash with the creation of The Jazz Beacon Award. Conceived by Lewis Nash as a way to recognize the important role and contributions these musicians have given to the world of jazz, The Nash inducted its first honoree, bassist Ron Carter, during his March 23rd appearance at the downtown Phoenix jazz club.

Carter had arrived in Phoenix to perform as part of “The Trio,” for the “Japan-Jazz Connection” concert, joining Takeshi Yamaguchi (guitar) and Lewis Nash (drums) for a concert of selections from their The Trio II Live in Osaka recording. In front of a sold-out crowd, Lewis Nash presented the award to Carter and unveiled a portrait created for him by Phoenix artist Abe Zucca.

Legendary saxophonist and NEA Jazz Master Benny Golson will be the next recipient honored with The Nash Jazz Beacon Award during his concert at The Nash on April 7 at 3 pm.

“The world of jazz is a rich place because of these incredible musicians, who play with such artistry and give so generously to their fellow musicians and jazz lovers around the globe. We wanted to recognize not only their contributions to music, but pay tribute to their status as living legends for the art form. For me personally, it is a true privilege and honor to perform with them, to hear their music, and most of all, to call them friends.” – Lewis Nash.

The Nash Jazz Beacon Award recipients will be displayed with honor at The Nash, 110 Roosevelt Rd, with future honorees to be announced at a later date. 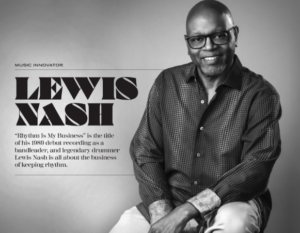 The Nash featured in The Entertainer! magazine